Recent report sheds light on the state of democracy globally

International IDEA’s report The Global State of Democracy 2019, published in November 2019, offers a comprehensive look at the global state and development of democracy during the past four decades. The report, now compiled for the second time, is based on a mass of data of 158 countries from 1975 to 2018. The central elements of democracy are measured by a total of 97 indicators upon which countries have been divided into three overarching categories; democracies (the quality of which can vary greatly), hybrid regimes, and non-democratic countries.

In January, International IDEA’s Secretary-General Kevin Casas-Zamora together with Director for Asia and the Pacific Leena Rikkilä-Tamang visited Finland to introduce the report and its central findings in an event organised by Demo Finland and the Ministry for Foreign Affairs of Finland. Democracy has not always managed to live up to all expectations of wellbeing. Many democratically elected governments have failed in reducing corruption, gender inequality as well as wider social and economic inequality or in creating employment opportunities and economic growth. However, the data demonstrates that, on average, neither authoritarian countries nor hybrid regimes have succeeded any better. According to the report, democracies are more likely to create sustainable well-being.

The number of democracies keeps rising

Despite many years of talk about democracy being in crisis, according to IDEA’s report, the world is now more democratic than ever. Only a quarter of countries were democratic in 1975 whereas in 2018 that share had climbed to over 60%. Democratic openings have occurred in countries that have never been democratic before. Democracy has also proven resilient as the majority (81%) of countries that were democratic in 1975 or have since become democracies, have remained democratic. It must be kept in mind, however, that being labelled as a democracy does not reveal the whole picture. There are many kinds of democracies and only less than a quarter are high-performing, meaning they rank well in all measured aspects of democracy.

Another very positive finding is that democracies offer better conditions for sustainable development than other forms of government. According to the report, however, the data does not show a clear-cut direct causal relationship between democracy and welfare, and there are other influencing factors besides the form of government. What the report does show is that democracies offer significantly better basic welfare, human development, and gender equality compared to other forms of government. In addition, it is easier to do business in democracies. The aspect of democracy that correlates the most with basic welfare is the absence of corruption.

The quality of democracy is decreasing

On one hand the report gives cause for celebration, but on the other it shows a lot of challenges. The number of democracies might be rising, but at the same time the quality of democracy in both new and established democracies has been declining. The report defines weak democracy as one which scores low on at least one of the five measured aspects. Their share is on the rise whereas the number of high-performing democracies, ones scoring well in every aspect, has been cut in half during the period under analysis. Civic space and judicial independence are aspects that have decreased the most even in high-performing democracies. New democracies are especially vulnerable; roughly one third of countries that have transitioned to democracy after 1975 have experienced a shift back to a hybrid regime or a non–democratic country. More than half of those have since returned to democracy. In some countries, democracy has experienced backsliding due to gradual and intentional weakening of checks and balances and curtailment of civil liberties. Six out of the ten countries which have experienced this are in Europe.

The report clearly shows a steep rise in the number of hybrid regimes. In 1975 seven countries were classified as hybrid regimes, and in 2018 that number was 28. In these countries the government often adopts democratic façades, for example in the form of regular but not truly competitive elections. Often in these contexts civil liberties are also extremely limited. In most cases the hybrid regime is not a transition phase on a journey to full democracy, but rather a permanent state. There are, however, exceptions: in 2018, two of the most enduring hybrid regimes, Armenia and Malaysia, transitioned to democracy.

Another worrying finding of the report is the persistence of corruption. Absence of corruption is the only aspect of democracy that has decreased globally throughout the period under analysis. Corruption undermines individuals’ trust in politicians, the government, and even democracy in general. In some cases, the countries’ inability to reduce corruption has been seen as the reason for growing populism. During his speech Kevin Casas-Zamora pointed attention to a statistic according to which up to 43% of countries suffer from high levels of corruption. Only 14% of countries have low levels of corruption. This means that corruption is a problem in every form of government. With all this, it is important not to forget that democracies have less corruption compared to hybrid and non-democratic regimes. In addition to corruption, Casas-Zamora pointed attention to gender equality and judicial independence as aspects in which progress has been slow.

The report also gives recommendations for developing and defending democracy. The recommendations range from improving opportunities for participation to increasing transparency as well as checks and balances. The roles of civic education and media literacy are also important. In addition, the report calls for an increased support for civil society organisations and free media. MEP Heidi Hautala (the Green Party) commented on the report in the event, emphasising the need to give democracy a central role in EU’s foreign relations. She also noted that the European Parliament closely follows the situation of those member states where some aspects of democracy have significantly decreased in recent years. Demo Finland’s Chair, MP Sebastian Tynkkynen (the Finns Party), also emphasised the significance of multi-party cooperation and dialogue and presented Demo Finland’s work as an example of support for pluralistic, inclusive democracy. 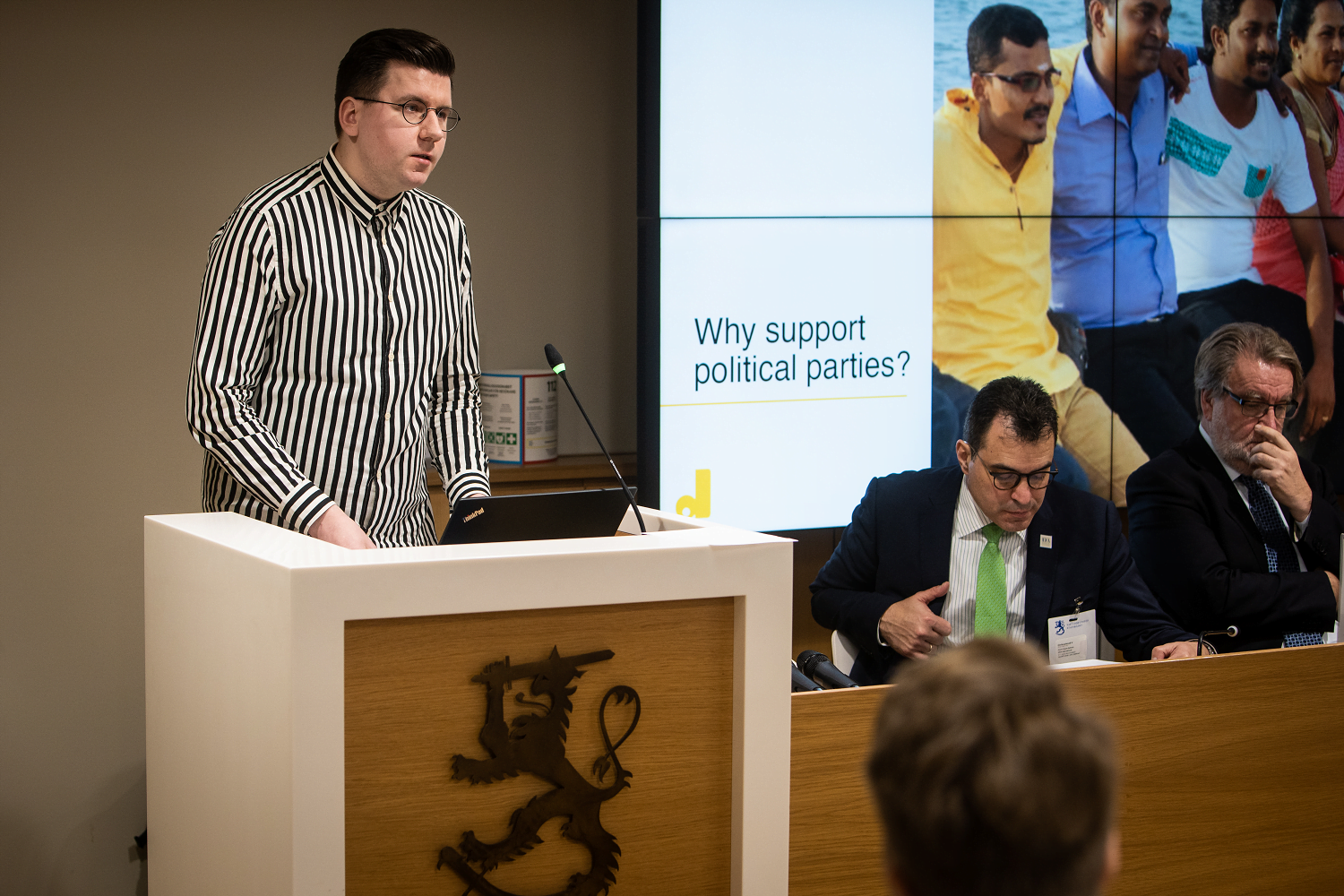 The Global State of Democracy 2019 is available for download here.

Political parties’ immense role as supporters of peace and democracy