Demo Finland and its member parties participated once again in the World Village Festival, organised on 24th-25th May in Helsinki. This year, also the EU parliamentary elections took place the same weekend, which also meant that the visitors had an opportunity to meet a particularly big number of politicians visiting the Democracy Tent. Most of the visiting politicians were election candidates, but also ministers and party chairpersons were among them.

In the Democracy Tent, the visitors could also participate in packing a suitcase for future members of the European Parliament. The suitcase consisted of EU’s fundamental rights, and the participants expressed their views on which rights especially should be enhanced by placing stickers on them. Not surprisingly, the task was difficult and all of the fundamental rights collected a lot of stickers, but in the end the most important ones seemed to be human dignity, protection of the environment, education, equality and minority rights. Demo Finland will deliver the suitcase to the new Finnish members of the European Parliament.

Demo Finland also organised a raffle where the participants could win a lunch meeting with a politician from one of the parliamentary parties. The visitors also had an opportunity to send postcard greetings to politicians. 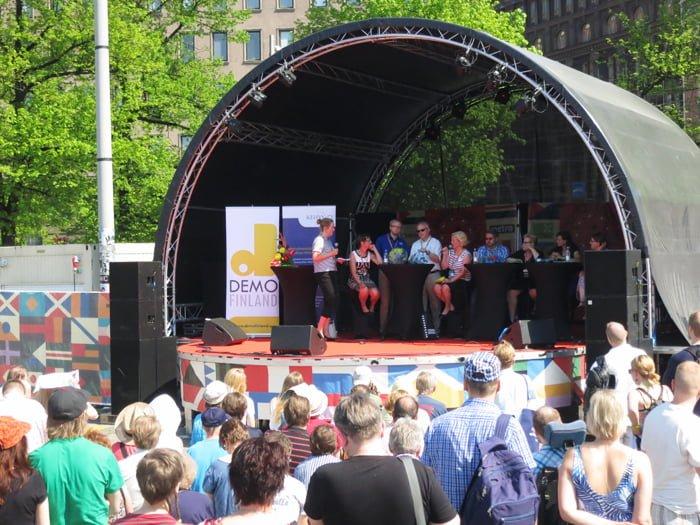 Together with the Finnish NGDO Platform to the EU Kehys, Demo Finland organised a panel discussion for election candidates on the festival. The themes of the discussion were EU’s environmental politics, policy coherence for development and values that the candidates would promote in the European Parliament. The panellists were Silja Borgarsdóttir-Sandelin (Swedish People’s Party), Simon Elo (The Finns Party), Sari Essayah (Christian Democrats), Heidi Hautala (The Greens), Miapetra Kumpula-Natri (Social Democratic Party), Heikki Patomäki (Left Alliance), Sirpa Pietikäinen (The National Coalition Party) and Olli Rehn (The Centre Party), and the discussion was hosted by Annika Damström.

The panellists’ opinions differed for example on matters of EU’s emission reductions and on whether the Nobel Peace Prize was justified, but they all agreed that human rights should always be on EU’s agenda.

A big crowd had gathered to listen to the discussion, and all in all there were 80 000 visitors in the festival during the weekend. Demo Finland thanks all the visitors and the political parties that took part in the Democracy Tent! 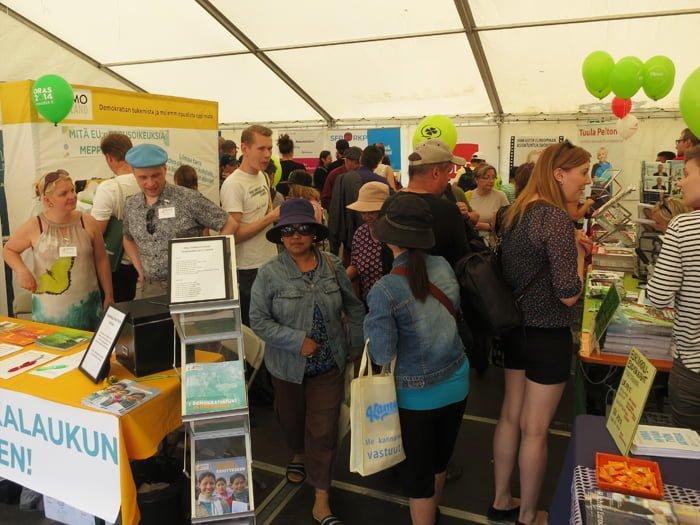 Meet Demo Finland at the World Village Festival in Helsinki!