“TSoP taught me to be a democrat”

Tunisian School of Politics (TSoP) trains young politicians on the principles of democracy. This is important, because Tunisia is facing another interesting election year. Last year the country held its first, long-awaited municipal elections. This year, for the second time after the Arab Spring uprisings in 2010, Tunisia is to hold parliamentary elections in October and presidential elections in November.

Demo Finland and the Netherlands Institute for Multiparty Democracy (NIMD) established the Tunisian School of Politics (TSoP) in 2012 in partnership with Tunisian Centre des Etudes Méditerranéennes et Internationales (CEMI). TsoP has trained already over 400 young Tunisian politicians on democratic principles and enhanced the cooperation of young politicians across the political party lines. In last year’s historic municipal elections 61 of TSoP alumni ran as candidates and 11 of them – all women – got elected. One of them, Souad Abderrahin, became the first woman elected mayor of Tunis and the first Arab woman to hold such a position.

Enhanced cooperation between political parties and with citizens

Even though Tunisia is often lauded as the success story of the Arab Spring, the country still faces plenty of challenges. One of them is the generally low level of trust among the citizens towards politicians. This is one of the reasons why the programme aims to increase cooperation between politicians and citizens. According to information gathered in 2018, the number of TSoP alumni who collaborate with civic actors at least twice a month has risen by almost 20 % in the last two years.

Cross-party cooperation between the political parties was also increased. For example, during 2018 ten permanent multiparty platform CDPP (Conceil de Dialogue entre les Partis Politiques) were facilitated as part of the programme. The members of CPDD signed a charter regarding the municipal elections encouraging actors to work together to ensure the success of the elections in May 2018. This is an important achievement, since local elections are crucial in the country’s transitional process and establishing a fair and safe environment for that purpose was much needed. According to independent evaluators TSoP and the multi-party dialogue platform have helped to create important and highly valued spaces that bring together actors from across the political spectrum in ways that are much more grounded in mutual respect and growing trust. The platform has enabled not only discussion but also traction on policy issues.

TSoP also organised various debates and public discussions enhancing both cross-party dialogue and cooperation between different level politicians and citizens. Some of the debates were organised outside of the capital area to support the decentralisation process. 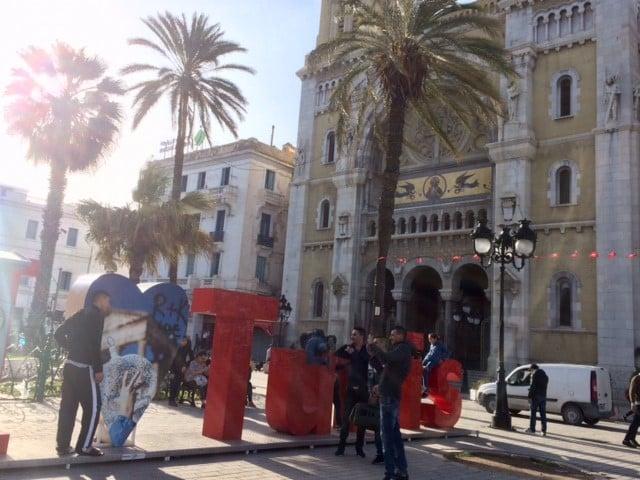 In Tunisia’s capital, the first woman ever was elected as the mayor of Tunis in 2018. Photo: Emma Pajunen.

During 2018 TSoP organised seven intensive weekend trainings and 39 politicians (20 men and 19 women) graduated TsoP. In addition, five participants were given certificates of attendance. Six best politicians of the class attended a study visit to Finland in December to learn of Finnish democratic practices and to share experiences with their Finnish colleagues. Watch the video of what TSoP has given the graduates!

"The Tunisian School of Politics taught me to be a democrat"

Over 400 young politicians have graduated our, NIMD and CEMI Centre des Etudes Méditerranéennes et Internationales Tunisie 's Tunisian School of Politics! Watch the video to find out what they have learned – or read the article on our website: https://demofinland.org/i-learned-to-be-a-democrat/?lang=en

The TSoP alumni were also trained in a separate Alumni Class. Approximately a third of the TSoP alumni obtained more influential positions in their respective parties during 2018. Some of the TSoP alumni replicated the training in their own parties. This is significant, for more politicians are exposed to the importance of multiparty dialogue and democratic values and the programme impact is more sustainable.

Gender equality is both a crosscutting and a separate objective of TSoP. Half of the politicians attending TSoP are always women. In addition, a separate Gender Class is organised. Prior to the training 29 % of the attendees estimated that their knowledge on gender issues was good and after the training 62 % of the attendees estimated the level to be good or excellent.

In 2018 TSoP expanded the trainings to the parliament of Tunisia. In three training events the capacities of 37 MPs (20 women and 17 men) were increased on for example legislation and economics. In addition, 45 MPs (19 women and 16 men) increased their capacities on media and communications skills in 15 training sessions.

TSoP had also a regional element: ”the Maghreb Class” gathered together 40 parliamentarians, academics and CSO representatives (22 women and 18 men) from Algeria, Morocco, Libya, Egypt and Tunis to discuss public administration and change and the participants drafted recommendations for their countries.

During last year political parties were also strengthened: 10 strategic plans were finalized, and the implementation of the strategic plans is followed during this year.

Read more about TSoP and the work of Demo Finland.

Young Tunisian politicians believe in multiparty cooperation: ”Democracy gave us a choice, it gave us freedom”