Why political leaders still tend to be men? How do challenges in politics differ in Zambia and in Finland? Why is the representation of women low in municipal politics? These and other questions about equality and politics were discussed in honor of the International Women’s Day on Wednesday 8th March. Seminar “Women, lections and campaigning” was organized in cooperation with the Ministry for Foreign Affairs of Finland, and the set of speakers was both impressive and international – Beauty Katebe, the chair of Demo Finland’s partner Zambia National Women’s Lobby, brought perspectives from Zambia, and president Tarja Halonen inspired the participants as a political role model.

The Ambassador for Equality Issues Anne Lammila opened the seminar. She emphasized the fact that the Finnish development and foreign policies are focusing on women and girls. Lammila is one of the five ambassadors of equality in the world, and she encouraged to keep up the flag and advocate gender equality.

Dr. Mari K. Niemi approached the questions of equality from a researcher’s point of view: why do academics still research this topic, why do we still discuss these themes? She presented facts as an argumentation: Two parties in Finland have never had a woman as a leader, the share of women candidates has never exceeded 40 % in Finnish elections and women are consulted as experts in media much less often than men.

Perspectives and challenges from Zambia

Beauty Katebe from Zambia National Women’s Lobby talked about the challenges that women candidates had to face during the last year’s elections but also about their successes. While the costs of campaigning and the candidate fees are high, women’s campaigning is financially challenging. As a matter of fact, men have most of the financial power. Corruption is also a big problem in Zambia and conflicts and violence are present in the political culture

However, Katebe was still positive: Zambia National Women’s Lobby has been working on women’s cross party cooperation and providing resources for women candidates, and she believes that Zambia is able to develop on this topic. 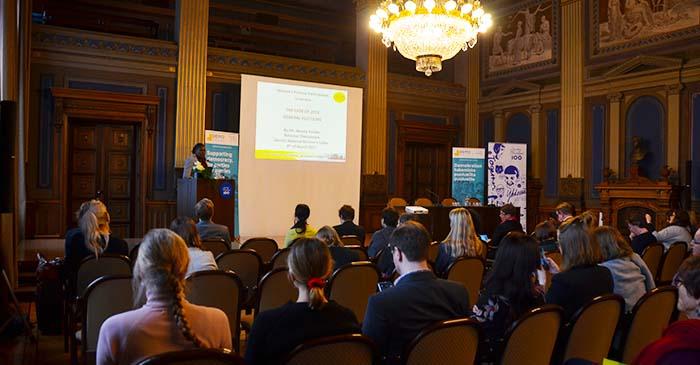 Beauty Katebe spoke about the situation in Zambia.

Equality is not yet achieved in politics

Similar experiences and global themes are found both in Zambia and Finland, president Tarja Halonen noted with 40 years of experience. She also brought up the financial resources: she started campaigning with half of the budget her male rivals had.

“You are always too young or too old, too fat or too thin, too pretty or too ugly, and if you fit you are not in politics.” This is how president Halonen described the mixed expectations set on women in politics, causing amusement among the audience. Regarding to Finland’s success during its hundred years of independence, president Halonen sees the continuing strive towards gender equality as one of the main reasons for that progress.

MP’s Silvia Modig (Left Alliance) and Tiina Elovaara (Finns) participated to the interesting and thought-provoking panel discussion with Beauty Katebe. They shared their own experiences and views, and they all highlighted the fact that the work on gender equality is not finished in politics. Tiina Elovaara pointed out that the committee work is still very much gendered. Silvia Modig agreed: women are still given a specific role in politics. Beauty Katebe told that in her country woman politicians should have a thick skin: politics and media treat women in a crueler way than men.

In local politics women’s participation is lower than at the national level, and panelists thought the reason to be difficulties in combining career, domestic work, children, and municipal politics. The importance of women’s cooperation was highlighted by both MP’s but accomplishing that has not been easy due to the reasons above. Beauty Katebe as well emphasized women’s cooperation and networking: women should gather to unofficial social events to discuss politics! 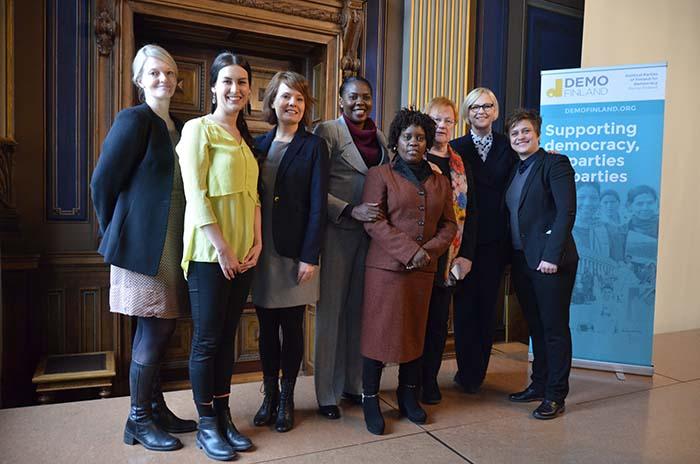 Intersectionality as part of the today’s discussion on equality

During the questions from the audience panelists were challenged to consider immigrants’ role and visibility in the politics. Modig emphasized that visible representation is needed by everyone: women, and sexual, ethnic and other minorities. Age was also one of the themes discussed that intersects with gender equality. During the seminar, it was highlighted many times that we should not be blinded by the achievements: there’s still a lot of work left.

Part of Demo Finland’s strategy is to build safe spaces for women: Demo Finland has developed multiparty groups, platforms, and cooperation, as Demo Finland’s chairperson and MP Eva Biaudet highlighted in her final remarks. She also pointed out that since 1991 when she was elected to the parliament for the first time, things have not changed too much. “Democracy cannot be whole without equality.”

Finland is needed to step up EU’s support for democracy