Zambians voted for a new president, parliamentarians, mayors and local councillors in August. Additionally, a fifth vote was cast in a constitutional referendum. The public attention has focused on the presidential election, since the opposition would not accept the result stating that the results were tampered. However, some positive signs were recorded as well, for instance the number of women candidates and the voter turnout both increased.

Juliet Kaira Chibuta, the Executive Director of the Zambia National Women’s Lobby, thinks that the elections can be considered as a small but significant victory for women, especially after all the hindrances. Earlier this year, a constitutional amendment was introduced imposing that all candidates must possess a certificate of 12 years of schooling and at the same time, the nomination fees were increased tenfold. Suddenly, due to the new requirements not a single current local women councilor in Demo Finland and ZNWL’s five project districts, was qualified to run as a candidate.

No fair chance for the opposition?

Counting of the votes became an issue of concern taking more time this year than in the previous elections. For instance, the official results of the local elections were not yet available more than two weeks after the elections took place. Because of the slow counting and suspicion for fraud, the main opposition party,  United Party for National Development, decided to take legal action hoping that the results would be nullified. The European Union and the African Union both had election observation missions present, who reported some malpractice but stated that the elections were credible in general.

In addition, electoral violence hindered women’s active participation to the electoral process. At least one opposition supporter was killed in a political rally in July resulting in a temporary ban on all campaigning, imposed by the President. Moreover, the governing party Patriotic Front was reported to control all campaigning making it difficult for the opposition parties to get their voice heard. Also, several opposition-minded media outlets were shut down during the run-up to the elections.

The result of the presidential election – sitting president Edgar Lungu getting 50.35 % of the vote and thus narrowly avoiding a runoff – caused suspicion in the opposition. Soon after the results were announced, Lungu stated that he would not take his oath until all doubts concerning the electoral process were cleared.

According to Juliet Chibuta, the nation is now alarmingly divided and there are people who have been forced to fled their homes due to their political stance. What is more, there is no set schedule for the judicial process and the media control has continued after the election. 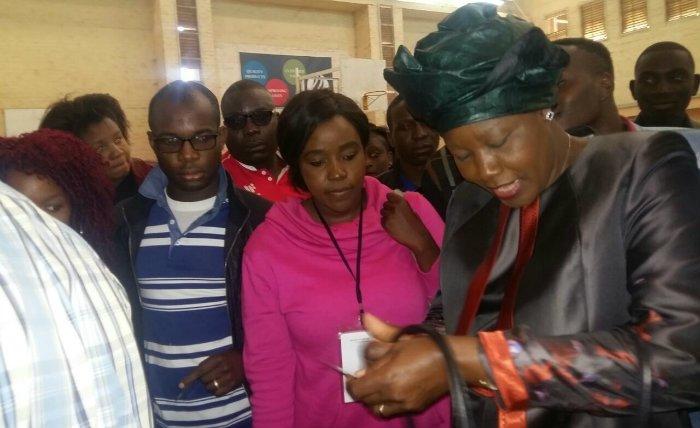 ZNWL and Demo Finland have been training hundreds of aspiring women politicians over the past few years. Sadly, most of them had to give up their plans to run in the elections due to the new requirements. However, ZNWL was able to reach a good number of nominated women candidates still over the summer and trained them on campaigning and linked younger candidates to more experienced women politicians who could offer their advice regarding the elections. In addition, ZNWL trained campaigning staff and election observers as well as ran a media campaign to encourage voters to choose women candidates.

The number of women candidates in the local council elections increased by around a hundred to a total of 451 women. However, the number represents only 10 % of all candidates. At the parliamentary level, every fifth candidate was a woman and just one woman, Edith Nawakwi, stood in the presidential race.

If Zambian parties are serious about their commitment to have more women in elected positions in the future, they must develop their internal nomination processes to become more transparent. Now the candidates were nominated at the last minute and there was no time to prepare and mobilize resources. This is a special concern to many women who on average have less control than men over money and other resources.

The work towards fair and equal politics will continue. For ZNWL, the most important task now is to gather women across party-lines and discuss the election process and its effects. This would also be a good way to show an example of constructive cross-party co-operation, says Chibuta.

There are some good signs too: many new candidates were young women and the total turnout rate was 56.45 %. It may not sound like a lot but compared to last elections the increase is a big one; less than a third of eligible voters made it to the election booth in 2015 presidential vote that was organized after the sudden death of incumbent president Michael Sata.

No shortcuts for women politicians – in Zambia nor in Finland