Has the positive trend of democratic development faded away? What is the role of Finland in supporting democracy in the ongoing decade? These questions were on air in the seminar organized by Demo Finland and the Parliament of Finland on the International Democracy Day, 15/9/2016. The Democracy Day was established in 2008 for reminding politicians and citizens about the importance of promoting democracy.

The opening speech of the seminar was held by the Second Vice-Speaker of the Parliament, Arto Satonen. According to Satonen, democracy has faced challenges during this millennium, for instance the increase in terrorism and the strong polarization, that can be easily boosted by using social media. However, the long-term trend shows a positive development of democracy as in 40 years the number of democracies has doubled. Satonen considered the role of Finland and other Nordic countries significant in promoting and supporting democracy at global level and particularly in Africa which is currently witnessing major political changes in many countries. 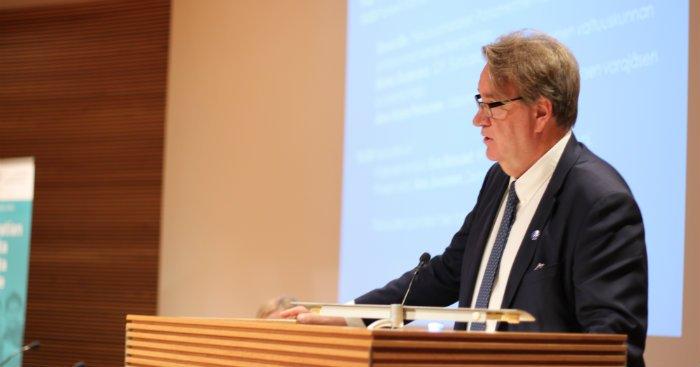 ”There is not only one type of democracy but various ways to be democratic”, said Human Rights Ambassador Rauno Merisaari

The Human Rights Ambassador Rauno Merisaari from the Ministry for Foreign Affairs of Finland supported Satonen’s opinion about positive long-term trend of democracy. Still, he reminded that even if Agenda 2030 of United Nations recognizes the connection between democracy and development, it is not a guaranty that the autonomous states will create and implement their own plans for promoting democracy. Even if parliamentary elections are organized, it does not automatically mean that a real democracy is in place. According to Merisaari, democracy is always worth promoting as it has a better cost-benefit ratio than any other regime. It benefits both macro-level by protecting national stability and micro-level by offering everyday-living capabilities, from lower mortality rate of children to wider opportunities to higher education.

During the panel discussion of the seminar, Members of Parliament Maria Guzenina, Aino-Kaisa Pekonen and Simon Elo discussed the status of democracy both in Finland and at the global level. Guzenina is the Chairperson of the Finnish Delegation to the Council of Europe’s Parliamentary Assembly, Elo the Vice-Chairman of the Executive Committee of Finnish Delegation for Inter-Parliamentary Union (IPU) and Pekonen a member of the Network of Finnish Women Members of Parliament as well as a vice-member of the board of Demo Finland. 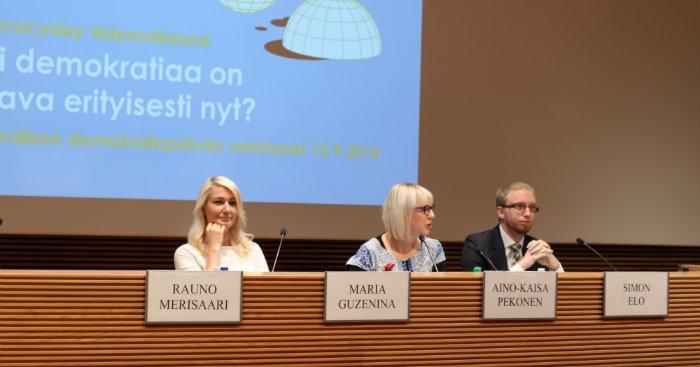 Members of Parliament considered their own role in promoting democracy

Guzenina opened the discussion by worrying about quasi-democracies becoming more common. “It is easy to judge other countries about their practices but we should start our work for democracy here in our own country. People do not trust politics and that is the grievance we should fix with access to fact-based information and education”, she said. According to her, the traditional attitudes and practices are not enough for solving the current problems but instead new flexible ways to react need to be adapted.

Pekonen highlighted that openness and work against populism are the main tools for strengthening democracy. “Problems will not simplify even if simple answers are suggested”, she said. Pekonen believed that Finland could support developing countries by setting examples of good practices. Particularly the tradition of multi-party cooperation is uncommon in many countries. “Here in Finland we are used to discuss from party to party, but it is not the case everywhere. For instance, in Zambia I noticed how there was no constructive communication between parties at first, but when everyone finally gathered together and started to discuss, local politicians noticed that actually there are shared problems that could be solved by cooperation”, told Pekonen.

Elo stated that strengthening women’s position in politics is a goal that cannot be emphasized too much. That is one of his goals as his new position as Vice-Chairman of the Finnish Executive Committee to IPU. According to him, Finnish democracy is strong and well-functioning as there is real interaction between the government and the opposition and politicians do not need to be afraid of political violence. “A threat is, that in the future only wealthy elite can run for political positions. It is not real democracy, if you cannot be a candidate without high income or massive property”, Elo pointed out.

MP and Chairperson of Demo Finland Eva Biaudet who sent her video greetings for the seminar audience worried about political inactivity of youth in Finland. She called for actions from politicians to ensure that everyone would be involved to political decision-making. “Democracy will not prevail if we do not work for it actively”, she said. “In democracies, it is the responsibility of politicians, the responsibility of us, to get everyone involved.”

Why to support democracy right now?

As Satonen and Merisaari adduced in their speeches, the positive development of democracy has been challenged lately. During the last decade, economic crisis and changing power relations of states have been the main reasons destabilizing democracies so strongly that even Freedom House has estimated that the year 2015 was an especially weak one for democracy. The instability of world politics and economy creates a need for supporting democracy right now – also because political change can give space for democratization.

The panelists agreed with the demand to support democracy right now. “The question is rather why not to support democracy. We have no other good choice”, stated Guzenina. The panelists highlighted how democracy is a requirement for stability of societies. “Democracy must be supported but it can never be forced by weapons”, Elo pointed out and Pekonen continued: “Democracy and peace walk hand in hand.”