For Ms. Nang San San Aye, it is the first time she is participating a multi-party training for politicians.

“This is a great opportunity to get to know other politicians from other parties and their views and opinions on current issues. After the course we can start collaborating together in our states and regions and create functioning cross-party relations”, said Nang.

She is one of the 22 participants of the training course “How to be a great MP” organized by the Myanmar School of Politics from 13th until 18th December. Altogether 10 parties have chosen their representatives from newly elected state or region level parliamentarians.

The training week was officially opened by the Ambassadors of Finland and the Netherlands accredited to Myanmar. Ambassador Kirsti Westphalen, based in Bangkok, encouraged the politicians to build trust and cherish co-operation: “Transition to a democratic and inclusive society does not happen overnight. It requires long-term commitment and willingness to work together. Political parties play an important role in this process – providing an opportunity for people to engage in public affairs – to voice their concerns, needs and desires.”

Ambassador Westphalen highlighted the role that women have played in Finland’s development and emphasized the importance of investments into social affairs. These investments allow vulnerable and easily marginalized groups to have an equal opportunity to meaningful participation.

She finished her speech by presenting the newly translated Myanmar language version of Demo Finland’s Gender Equality toolkit to Ms. Nang who received it on behalf of the whole group. 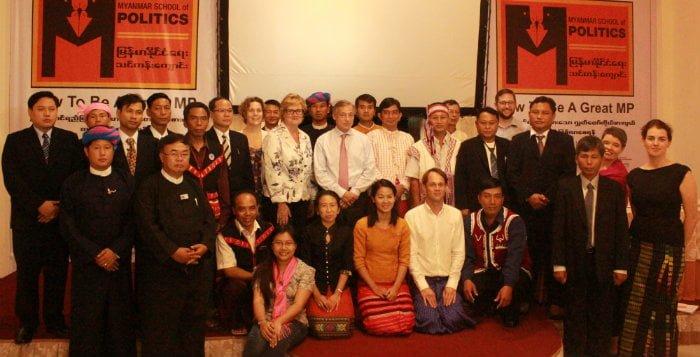 Ms. Nang told that in her own state, Shan, women are not visible in politics. One of the reasons for the absence of women is that many women are afraid of participating in politics, since for many years politics has been associated with conflict.

According to her women should be made to understand that everyone can participate in politics, present their ideas and develop their own areas and the whole country. “I want to act as a role model for young women and men and show, that we can be active and take responsibility on issues concerning ourselves. Young people should not be afraid of joining politics.”

Myanmar School of Politics is a joint programme of Demo Finland and NIMD, which on their behalf are financially supported by the Ministries for Foreign Affairs of Finland and the Netherlands.