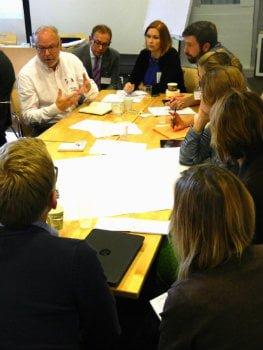 The event was third of its kind and for the first time, a Nordic Academy for Political Party Assistance Organisations was held together with the meeting. The purpose of the Academy is to link and learn regarding to current developments and topics in international political party assistance.

In the first session of the Academy, invited experts from EEAS, OSCE ODIHR and International IDEA focused on issues that should be taken into account when developing new democracy support programs. Some of the most important issues covered were political party financing, electoral systems, identifying all signifcant political actors in partner countries and examining the divisions of power within the political system and parties.

The second part of the Academy, facilitated by Dr. Marcin Walecki from OSCE ODIHR, focused on the ways of supporting two core values of political parties – accountability and representation. In the discussion some of the most important issues identified and addressed were internal party democracy and the functioning of the opposition in order to keep the governing parties accountable.

The second day of the event kicked off at the Parliament of Finland. The chairperson of Demo Finland, Member of Parliament, Ms. Satu Haapanen addressed the audience and stated that development actors should not neglect the importance of political parties in sustanaible development. Whether the parties and party system function well or poorly, they are still on the driver’s seat in creating economic, social and political development in their countries. Thus, supporting political parties to conduct their work responsibly is a good way to support local ownership and truly sustainable development. 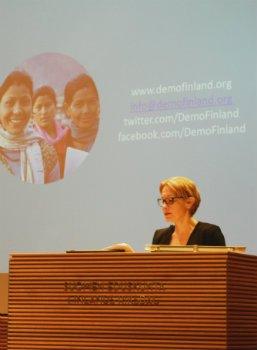 The Minister for International Development, Mr. Pekka Haavisto, told the audience that democratic governance should be granted a spot on the post 2015 development agenda. When asked about working with undemocratic regimes, Mr. Haavisto said that it is better to engage, discuss and try to understand, than leave some countries out of international cooperation.

The Nordic political party assistance organisations handed out a joint statement to the Minister. The statement is aimed at all Nordic Development Ministers and reminds them of keeping democracy high on the negotiation agenda towards new development goals, as they promised in their own statement earlier this year. The joint statement, signed by eight Nordic organizations, is available for reading here.

The two-day event was concluded with a meeting focusing on identifying thematic and geographical synenergies in the work of the Nordic democracy support organisations. The Nordic countries are known as strong advocates of democracy and the mindset of the event was that they are stronger together than far apart. Therefore, all the organisations are willing to continue the annual tradition and develop the Nordic Academy in order to strengthen their work.