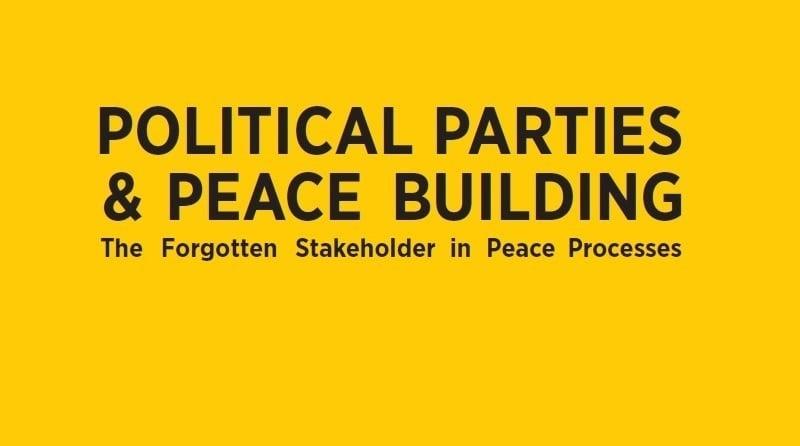 Political Parties of Finland for Democracy – Demo Finland’s recent publication Political Parties and Peace Building – The Forgotten Stakeholder in Peace Processes offers current information on political parties in peace building. The publication gives its readers a broad understanding of the basics of peace processes regardless of prior knowledge. To readers well informed on the topic, the leaflet is a great way to get a more in-depth understanding of the often-neglected role political parties play in creating sustainable peace. The publication concludes with straightforward recommendations for international actors wanting to support democracy in fragile states.

Democracy and peace building have a complex relationship. Sustainable peace is difficult to create and maintain without democracy which offers all affected parties a way to make their voices heard and get their grievances into the political debate where solutions can be discussed. At the same time, however, rushed and artificial democracy in fragile states is a serious threat for peace. In democracy political parties and other political movements are forced to compete with each other for power. Societies divided along ethnic, regional or political lines are especially vulnerable to this competition. There the stakes for becoming the dominant party are massive because the winner of the first post-conflict elections often dictate the direction of the country’s future development while the opposition is left watching from the sidelines.

The competition to become the largest political party materialises in elections. Unrest before, during, and after elections are one of the biggest threats any fragile and newly started peace process faces. Parties in fragile states also have an unfortunately common tendency to use dishonest means such as fraud, intimidation and outright violence to ensure the best possible election outcome for themselves. Seeing the potential for relapse into violence that comes with elections, there is ample reason to question the narrow-sighted focus on them as the best indicator of progress towards peace. What is needed is an effort to look for new reliable ways to measure multi-party dialogue and parties’ potential to influence politics in line with citizens’ wishes.

Of course, elections as such are important and should be strived for because they legitimise political rebuilding and, in the best-case scenario, activate citizens to be part of decision-making. However, if the society, political institutions, and citizens – in a word, peace – have not been prepared properly, elections risk failing the whole peace process.

The actors involved in the peace process need to make sure that the society recovering from conflict is ready for elections. Local and external actors must support the local political structures, practices, and political parties as well as give proven examples of good governance where co-operation is promoted over winner-takes-all competition. The post-conflict politics need to be organised in a way that do not allow the winner to dominate all decision-making and completely disregard opposition parties.

Inclusivity must be a real and integral part of institutions and not just part of the rhetoric about the greatness of democracy. An efficient way to achieve this is to support the founding of new parties and through them minimise the number of groups left unheard. Still, a lot of parties does not necessarily equal sustainable peace. Parties that are unable to do politics effectively are not parties that can create and nurture peace. This highlights the need to support parties’ capacity. Without special attention to capacity building, women and youth are easily left out of traditional politics leaving more than half of the population unrepresented in the official political rebuilding. Another important argument for supporting parties’ capacity is that skilled party members are the most reliable way to have messengers that let people at the highest positions know of the grassroots problems that exist in society.

Perhaps the biggest role in creating a democracy that can survive elections falls on inter-party relations between parties and individual politicians. At the core of Demo Finland’s work is the idea of multi-party democracy in which parties are capable of peaceful dialogue, even on difficult topics. The idea is easy to identify in everyday life: if you consider your colleague to be your friend – or even your equal – the likelihood of disagreements growing into big conflicts is small. Similarly, politicians and parties that are able to work together and respect each other are more likely to reach a compromise than resort to violence. It is for this simple reason why multi-party dialogue must be seen as the cornerstone of every peace process, the element that simply cannot be forgotten.

At the end it is important to remind that it would be a mistake to view the delicate relationship between democracy and peace building as a sign of the two being incompatible. Democratic systems make it possible to compete on the political field with mutual understanding and respect, whereas in other systems the competition is practically always more intense. For example, in authoritarian single-party systems the competition for control becomes a life-or-death question for parties and subsequently translates easily into violent competition between political groups. Democracies have been proven to be more peaceful than other systems and there is no reason not to support peace with the best tool for the job.

The views expressed are those of the writer and do not necessarily reflect the views of Demo Finland.