Ave Maria Semakafu, coordinator of the Tanzania Women Cross-party Platform, said that in Tanzania the biggest challenge for women’s active participation is the culture that marginalizes women. Women are seen as supporters and not as leaders and therefore, women do not rise to leadership position within their parties. She also took up the issue of money; campaigning is really costly in Tanzania and it is the men who usually decide about the use of money.

President Tarja Halonen agreed that women candidates struggle with having sufficient amount of money for campaigning. In Finland too, it is still seen that the money and time women use for politics, is taken away from their families. Halonen told that during her first presidential campaign, people used to think that she is neglecting her family, even though her children were already adults.

Eva Biaudet from the Swedish People’s Party in Finland was also on the opinion that combining family life and politics is still a challenge, especially for women. As a young parliamentarian in the early 1990’s she had received a piece of advice from Tarja Halonen, a Member of Parliament at the time: ”Tell your children that mom needs to be away from home because she needs to be there for other children in the world as well”. 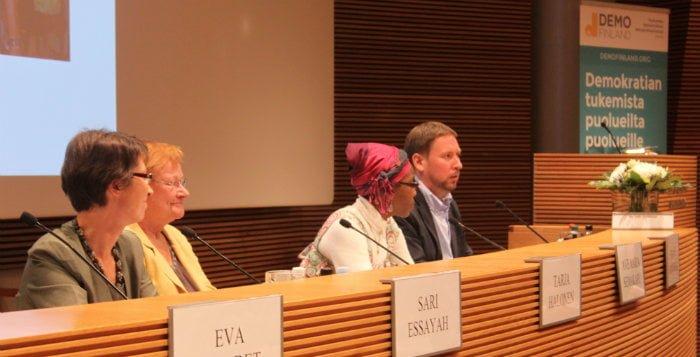 Sari Essayah, Chair of the Christian Democrats, said that women’s cross-party networks are still relevant in raising up questions concerning women’s political participation and promoting women candidates even though equality is not only a women’s issue. Paavo Arhinmäki added that there is a need for progressive men who are ready to challenge all structures that discriminate women or men. Also Eva Biaudet called for deeper understanding of discriminatory practices and structures.

Tarja Halonen emphasized the importance of peer-support, especially for women who are campaigning for the first time or for positions that have not been held by women before. Ave Maria Semakafu told the audience that Tarja Halonen is a role model for the Tanzania Women Cross-party Platform and success stories of women politicians give confidence for aspiring women candidates over party and country borders.

The Finnish development co-operation sector is currently facing major funding cuts and according to Paavo Arhinmäki it is a shame to see Demo Finland losing such a big part of its funding. Tarja Halonen concluded her message by saying that Finland is not an island and there are still plenty of common obstacles for women on our planet.

Ave Maria Semakafu thanked Demo Finland for its support to the Tanzania Women Cross-party Platform and told that thanks to the co-operation, some glass-ceilings for women have been broken. For instance, two parties have nominated a female presidential candidate. 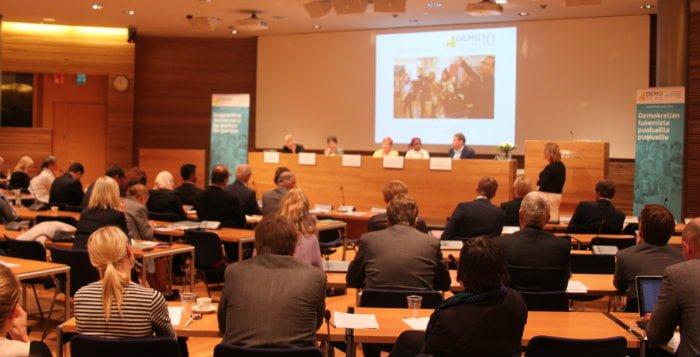 Bridging the gap between youth and political parties