Bridging the gap between youth and political parties

Demo Finland’s 10th anniversary seminar was reserved for discussion on the current state of democracy and the future of democracy support. The panel discussions held addressed two separate focus areas of Demo Finland’s work during its first 10 years: enhancing the role of youth and gender equality in politics.

All participants of the first panel agreed that there is an urgent need to involve more youth in political parties in order that politics could become truly representative. For instance, in Myanmar the average age of the population is 28 and in Tunisia around 70 % of the citizens are 35-years or below. However, they are absent from politics, largely due to the history of politics belonging to certain dynasties as in Sri Lanka and Tunisia or as in the case of Myanmar, those who have gone through the military ranks to get promoted to the positions of power.

The Finnish panellists, Simon Elo, Member of Parliament (Finns) and Maria Ohisalo, Vice chair of the Greens, were on the opinion that there are dynasties in Finland too and that money plays too big of a role in getting elected.

Nalinda Jayatissa, Member of the Parliament of Sri Lanka (People’s Liberation Front), stated that the culture of political dynasties have resulted in youth losing trust in democratic politics. Sabrine Ghoubantini, Member of the Tunisian Parliament (Nida Tounes), told that the political parties need to work much more to reach at the youth – now there is a shield keeping youth out from political parties. To break this barrier the language of politics must change – youth want short and clear messages distributed to them via social media and other modern channels.

Simon Elo continued by saying that these channels must work two ways and allow the youth to represent their ideas to political parties. According to Maria Ohisalo youth must learn about politics from early on and she would like to see politicians and political youth organisations visiting schools and becoming more active on social media – at the moment many youth are exposed to politics only during elections. 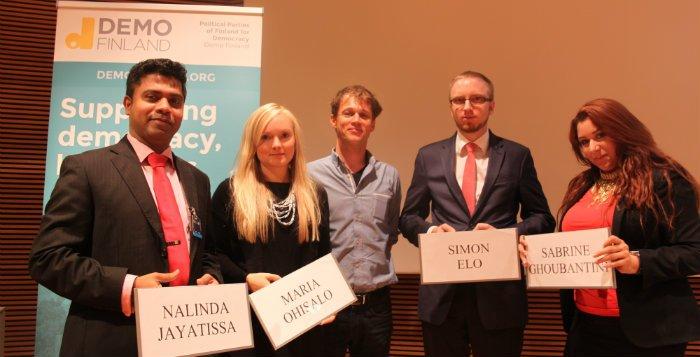 All the panellists have participated in Demo Finland activities. Both Finnish panellists have been to Nepal with Demo Finland and according to them, it was an eye-opening experience to see the realities of youth and women politicians who are trying to make themselves heard in a male-dominated political culture.

Nalinda Jayatissa added that from his perspective, it was impressive to see how the youth and student politicians of Nepal were able to sit around the same table and discuss their issues openly – something that is still to be achieved in Sri Lanka, even though some first steps have been taken with the support of Demo Finland.

Bram Steenhuisen, coordinator of the Myanmar School of Politics, told that traditionally the youth are not encouraged to question their elders in Myanmar. However, questioning and challenging are vital for functioning democratic politics and Steenhuisen was happy to see that with the confidence the youth gain at the Myanmar School of Politics, they eventually feel that they are allowed to raise their concerns.

Sabrine Ghoubantini argued that challenging cultural norms of politics is essential in Tunisia too, especially regarding to the participation of young women, which has not been traditionally encouraged. She added that the Tunisian School of Politics can help women as well as youth to advance in their parties and that the multi-party approach used is needed in Tunisia where there is no previous experience of a multi-party system.

Roel von Meijenfeldt, an individual expert on democratization, was happy to see that these young politicians are trying to bridge the gap between political parties and youth. According to him, youth are the greatest resource of many democratizing countries and their know-how should be used to create channels of participation and expression they find tempting.