Representatives of the Zambia Women Parliamentary Caucus visited Finland in early June to learn about Finnish equality practices and women’s cross-party cooperation especially on the parliamentary level. The delegation consisted of the Minister of Gender and Child Development Nkandu Luo and Member of the Parliament Moono Lubezhi. Minister Luo is the chair of the Parliamentary Caucus and Lubezhi its secretary. In Zambia women are underrepresented in politics – only 12 percent of parliamentarians are women. In Finland the corresponding figure is 42 percent.

During their three day visit, the Zambian politicians got introduced to equality practices on the national level, in the political parties as well as in the society in general. The visit started at the Ministry of Social Affairs and Health and its unit for gender equality discussing the state of gender equality in Finland and the mechanisms in promoting equality. Next stop was at a women’s shelter to discuss gender based violence and to hear about the services to the victims. The visit was hosted by the women’s organisation of the Left Alliance. Especially preventive services raised the visitors’ interest. The afternoon was spent discussing internal democracy and equality practices within political parties with the Green Women and the Swedish People’s Party’s women organization. 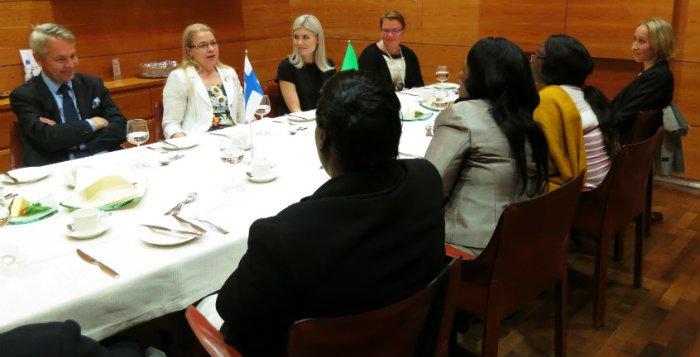 The second day of the visit was spent at the Finnish Parliament where the delegation met with Secretary-General Seppo Tiitinen, heard about the recent government forming negotiations, the citizens’ information service and media relations of the Parliament, the work of the Constitutional Law Committee and met with representatives of the Finnish Parliamentary Women’s Network. The evening reception was hosted by the Women’s Organization of the Finns Party and the Women’s Organisation of the Centre Party. Traditional Finnish foods were served and stories heard from both Zambian and Finnish women politicians.

On the last day of the visit, Minister Luo met with Minister for Foreign Trade and Development Lenita Toivakka and participated in a seminar on equality in politics, co-hosted by Demo Finland and the Ministry for Foreign Affairs. The seminar served also as a launch event for Demo Finland’s new toolkit on gender equality within political parties and women’s cross-party cooperation. Later the same day, meetings were organized with NYTKIS – The Coalition of Finnish Women´s Associations and the National Council of Women of Finland in order to discuss how women’s organizations lobby for equality in Finland and Zambia. 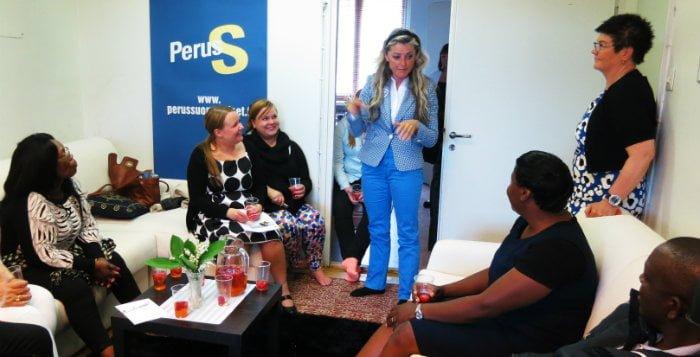 The women organisations of the Centre and the Finns Party, MP Kike Elomaa speaking

Honorary Luo and Lubezhi were glad that there were numerous practical tips they can later on use in their work in the Zambian Parliament. For instance, the delegation was very interested to hear about paternal leave since in Zambia it is only possible for a mother to stay at home and take care of a newborn. In addition, gender mainstreaming and gender impact assessment were among the most interesting practices. The delegation also received concrete hints on the cooperation of ministries in advancing gender issues. Also, the guests were impressed by the reforms the Finnish Parliamentary Women’s Network had been able to push together across political party lines regarding to children’s day care.

The visit was a follow-up to a training organized for Zambian women parliamentarians last autumn by Demo Finland, with an aim to support the Zambia Women Parliamentary Caucus’ strategic development. 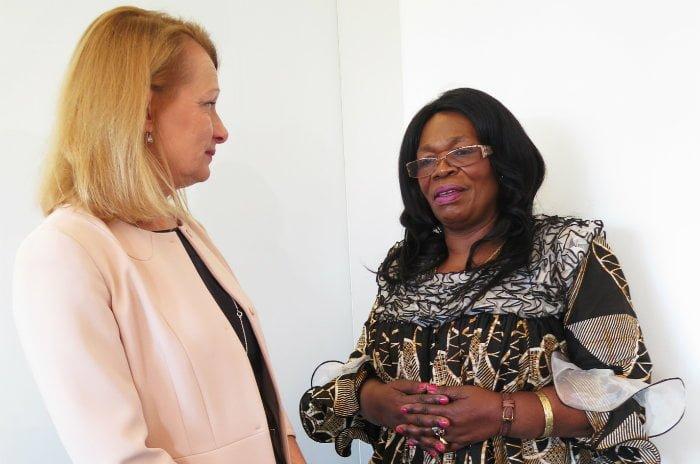