Ms Biaudet started the seminar by highlighting how democracy cannot be taken for granted but work for democracy should be done actively every day. The Director of Programmes in Demo Finland, Ms Jonna Haapanen pointed out that most democracy support organizations have active democracy projects during elections, but for sustaining the results democracy work should be done also outside election periods. Periods between elections are also fruitful for promoting multi-party dialogue. The Myanmar School of Politics is developed for responding to this need by strengthening the democratic role of political parties at the regional and state level and enhancing a practice of multi-party dialogue also between elections.

The chairperson of Demo Finland, Ms Eva Biaudet tells about ideas and tools for effective work for democracy.

The audience of the seminar consisted of representatives of the Ministry for Foreign Affairs of Finland as well as representatives of different political parties. The audience was especially interested in the political situation of Myanmar as well as the results of MySoP. Myanmar was governed by military junta until 2011, and the first civil president in 50 years, Mr Htin Kyaw, was sworn in as president in March 2016. The Senior Programme Officer at MySoP, Mr Aung, told that the atmosphere in Myanmar is full of hope in regard to democratization process. He also believed that the powerful status of Ms Aung San Suu Kyi, the leader of the ruling party National League for Democracy, can inspire girls and women in Myanmar to become more active in politics.

Mr Aung named logistics as a challenge for the School of Politics as the travel to course locations can take up to 24 hours from some parts of the country. In turn, Mr Aung was glad to tell that some of the participants of MySoP have succeeded in state level elections. 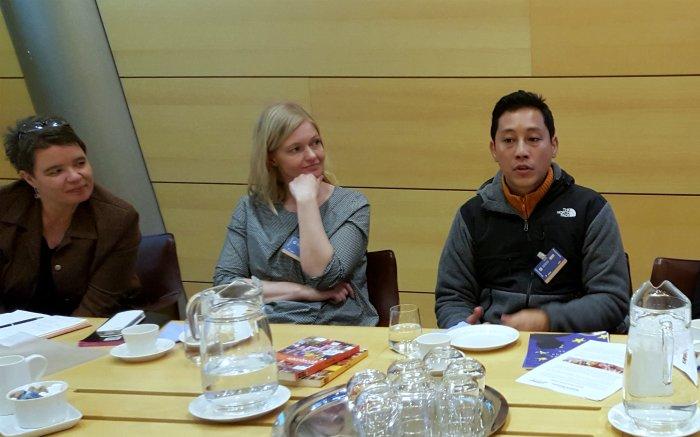 The Senior Programme Officer of MySop, Mr Nay Myo Aung tells about work of School of Politics in Myanmar

During the questions from the audience, the executive director of Demo Finland, Ms Anu Juvonen explained the special role of non-governmental organizations in promoting democracy. “In regard to School of Politics, we are piloting something new and fresh. This is the beauty of the NGO’s – we can pilot something that has not been done before,” described Ms Juvonen.

On the second day of his visit, Mr. Aung visited the party office of teh Social Democratic Party in Finland for getting to know policy and programme work of Finnish parties. The visit to the party office was hosted by Ms Hildur Boldt, the second vice-chairperson of Demo Finland. In Myanmar, the tradition of policy and programme work of political parties is still taking shape and MySoP has a significant role in promoting the this practice among politicians and political parties in Myanmar.