Tunisia has adopted the ABC of democracy

The Tunisian School of Politics, supported by Demo Finland, is building bridges across political borders in Tunisia. In the country that only recently shifted to democracy, politicians must learn the basics of constructive dialogue and decision-making. During the lessons, former political enemies have become friends. The peaceful elections during the late 2014 showed that democracy has steadily advanced.

Demo Finland started to support Tunisia’s democratic transition in 2012 by founding the Tunisian School of Politics (TSoP) with other international partners. “There cannot be democracy without democrats”, emphasizes Fadhel Blibech, the coordinator of TSoP.

The School is attended by younger generation politicians, most of them aged 25–40. Political training is needed, since Tunisians have no former experience of working in a multi-party setting. Habib Bourguiba, the first President of the nation, had practically speaking a life-long mandate. He was ousted in 1987 by Zine El Abidine Ben Ali who organized quasi-elections, where results were known before a single vote was cast.

The Jasmine revolution in 2011 started the transition from a single-party system to a pluralistic society with more than 100 registered parties. In the 2014 elections, the secular and liberal Nida Tounes and the islamist party Ennahda gained most of the seats in the Tunisian Parliament.

From friction to friendship

The first class of the TSoP was completed in 2012. Around a hundred politically active youth from various parties attend the classes annually. The school has attracted around 40 Members of Parliament as students, representing about 20 percent of the politicians who were elected to the first post-revolution Constituent Assembly in 2011. Every third alumni of the school candidated in the 2014 parliamentary elections.

In practice, all participants attend five three-day weekend sessions during their year as students of the TSoP. The students are offered political know-how with an emphasis on practical skills. The students attend classes covering politics, law, and communications as well as participate in debates and simulation exercises. In addition to the workshops, the TSoP also hosts open debates whilst facilitating dialogue between political parties, civil society and other actors in the field. 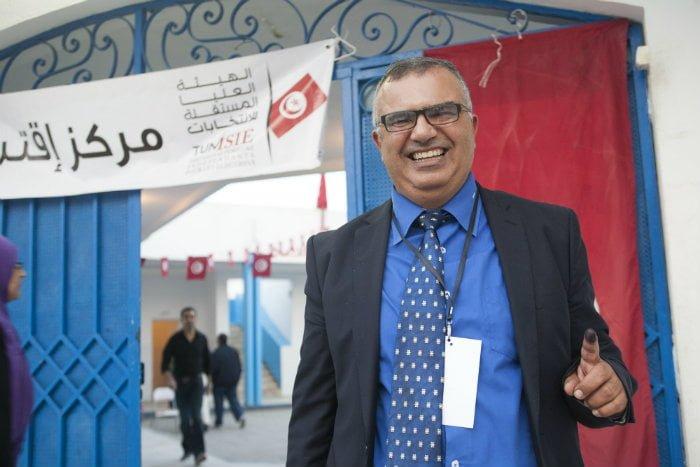 Fadhel Blibech after casting his vote in the Presidential election

The students of the School get to know each other during the breaks, while eating their meals together and staying overnight at the same premises. Fadhel Blibech says that spending time together has a remarkable influence on the students. “Sharing bread changes everything. In the beginning, students having opposite views virtually attacked each other like cats with their claws out. But thanks to the School, many of them have become good friends”, he describes.

Cheeks are kissed and compliments given with a smile when Hichem Hosni and Kmar Gazzou arrive to the office of the TSoP for an interview. Politically they are far off each other: Hosni is a founding member and the chairman of the leftist Parti Populaire Progressiste, whereas Gazzou belongs to the liberal Nida Tounes, the party that won most of the votes in the recent election. Both are also alumni of the TSoP.

Hichem Hosni got elected to the Constituent Assembly in 2011. At the same time, Kmar Gazzou was trying to give her input to the new constitution by acting in civil society organizations. Currently, Gazzou works as a trainer on communications in her party.

“The most important thing the TSoP has given me, is the opportunity to get to know youth from other parties and to understand their visions. Even though everyone would stick to their ideology, a major change in attitudes has taken place. There used to be no communication across party lines”, says the 27-year-old woman.

According to her, it has been important to see how things are done abroad. The school invites speakers and trainers from various countries. The alumni have been on study trips to Finland, the Netherlands, France and Bulgaria, to name a few. 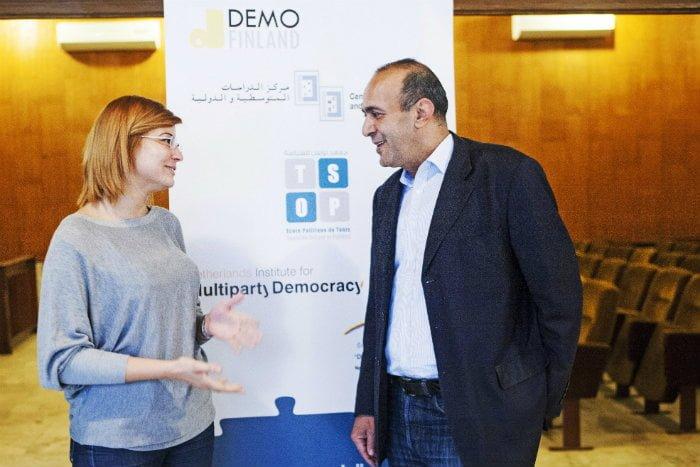 Half of the participating politicians are women. However, women are underrepresented in Tunisian politics and also as voters. Out of the 27 presidential candidates, only one was a woman. Gazzou hopes that one day Tunisia has a female president.

“There are a lot of women leaders in civil society organizations, but this does not extend to political parties. I hope that we will learn how to react and act on political issues, and even more importantly, we have to initiate and thus fully engage in political decision-making.”

Hichem Hosni was among the most experienced students of his class. Hosni, 49, found his first political movement already in 1985. “I am old as a person, but young as a Tunisian politician!”, says Hosni tongue-in-cheek. “Before the revolution there were very few politicians. Even though there was interest, one could not participate because it was illegal.”

For Hosni, the TSoP has been an unique platform for dialogue: “In Tunisia, political education has been a privilege of academics. The TSoP brought the progressive ones and the islamists, the liberals and the socials to sit around one table. It has cut down the once evident friction.”

Hosni wants to entrench the democratic way of acting also within individual parties. “It is fashionable to give an impression of being a democratic party, but to really become one, you must have internal party democracy in place.”

Local level and civil society to be involved

The School of Politics is ran by the Centre des Etudes Méditerranéennes et Internationales (CEMI). The Director, Ahmed Driss, believes that the younger generation will be ready to occupy the political sphere in a few years. “Currently, we just want to engage a good number of political actors, but in the future there could be demand for local and targeted trainings.” 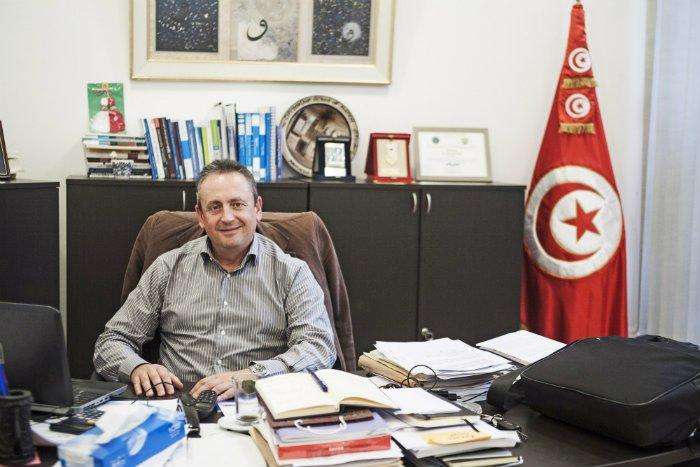 In addition to Demo Finland, the TSoP is supported by the Netherlands Institute for Multiparty Democracy (NIMD) and the Bulgarian School of Politics (BsoP). The success of the first years has created interest in the concept. Currently the European Council funds a training program for civil society actors, and the European Union has given the consortium a grant to organize similar training in six governorates of Tunisia, in order to make the school accesible for smaller parties and local actors.