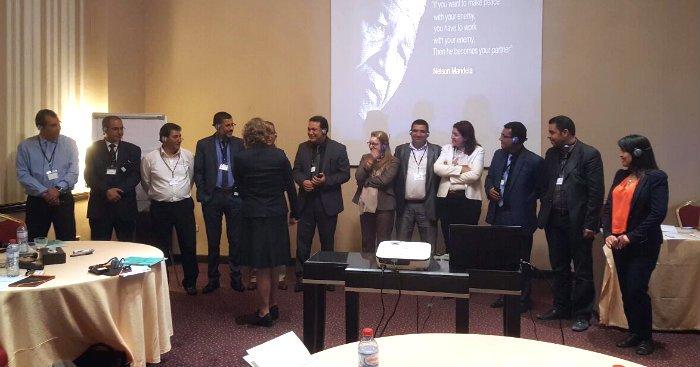 Tunisia has been on the path towards democracy ever since the Jasmine revolution in 2011. Last autumn, the democratization process gained world-wide recognition, when the national dialogue quartet was awarded the Nobel Peace Prize. Several participants of the national dialogue process have also taken part in the activities of the Tunisian School of Politics, a programme run by Demo Finland, NIMD and CEMI.

Conflicts between the parties were common especially during the first years after the revolution. It seems though, that the political parties’ trust in dialogue has increased, and another milestone was reached recently, when political parties agreed to set up an interparty dialogue platform that will be facilitated by Tunisian School of Politics. The platform will function as a permanent arena for discussion and collaboration amongst political parties in Tunisia.

The parties have appointed representatives to the platform and the first meeting was held in mid-April. The objective is to provide the parties with a neutral zone where they discuss issues of mutual concern. According to the participants, free exchange of ideas is needed in order to strengthen mutual relations between the parties and their members, and to identify potential contentious issues and seek common ground regarding to them. Even though Tunisia is the only country of the Arab spring that is still committed to democracy, major political issues, such as economic recession, terrorism and youth issues, remain.

The discussion within the platform is confidential, making it possible to deal with sensitive topics as well. “The common platform makes it possible to go beyond the surface, and then you will find that there is more agreement between political parties than people would think”, explained one of the politicians who participated to the first meeting of the interparty dialogue platform.

Read more about the Tunisian School of Politics here.